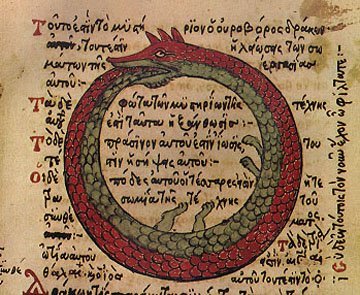 Under the expert guidance of Matteo Martelli, we introduce arguably the greatest alchemical authority of antiquity, Zosimus of Panopolis. Writing in Middle Egypt early in the fourth century, Zosimus is a fascinating thinker, combining in his overarching concern with the transformations of metals and other substances integral concerns with spiritual development along lines often described as both ‘Hermetic’ and ‘Gnostic’.

We discuss the basics of Zosimus’ (auto)biography, along with the main ‘cast of characters’ found in his works: Theosebia, alchemist and addressée of many of Zosimus’ writings, Nilus, a priest-alchemist whom Zosimus thinks is a dangerous fool messing with demons and astral manipulation, and Maria the Jewess, an earlier alchemist upon whose writings (along with those of the Pseudo-Democritus and the Thrice-Great Hermes) Zosimus founds his own practice. We discuss Zosimus’ chief works surviving in Greek, which can be divided up into three collections or epitomes (Zosimus’ works as he wrote them may be lost to us, as what we have is the result of a long process of East-Roman curatorial work): the Authentic Records, the Chapters to Eusebia, and Chapters to Theodorus, along with the loose texts The Final Account or Final Withholding (which we shall be covering in detail in a special episode, because it’s the business!) and the Book of Sophē the Egyptian (more survives in Arabic, but we’ll get to that in a separate episode).

We then turn to what’s in the surviving books of Zosimus. He wants to transform metals by deeply ‘dyeing’ them, such that their actual nature is changed from one metal to another. Quicksilver is somehow connected with the basic substance underlying all materials (or it may be that substance). The question of embodiment in Zosimus: how does something become a body, and how does a body become a spirit (pneuma)? There follows further discussion of the importance of pneuma in Zosimus’ theory.

We then get into the ‘spiritual’ side of Zosimus’ alchemy – a category which we have already decided is an anachronistic one, but okay – and discuss his dream-descriptions and citations of Hermetic tractates. Why dreams, and what is Zosimus telling us with his dream-narrations? This is a very good question, which we approach from a few angles without attempting anything so foolhardy as an answer.

We then turn to modern work with Zosiman recipes in the chemical laboratory, and discuss the famous ‘spit on matter’ passage from The Final Account, which brings the conversation to matters demonological and astral; the true alchemist does not rely on daimones (like the accursed Nilus does) for her alchemical procedures, but relies on nature. After this solvere section, distinguishing the ‘material’ versus ‘spiritual’ aspects of Zosimus’ alchemy, comes a final coagulare, where Professor Martelli brings them back together into the organic unity they actually are in his writings.

Matteo Martelli is Professor of the History of Science at the University of Bologna, and Principal Investigator of the ERC funded project AlchemEast. His published works include the first critical edition with English translation of the Pseudo-Democritus.

The Suda’s entry for Zosimus (ζ 168), translation from the Suda Online project: Of Alexandria, philosopher. [He wrote] Matters Alchemical, addressed to his sister Theosebia; it is alphabetically arranged in 28 volumes, and known by some as Things Wrought By Hand; and the Life of Plato [sc. is by him].

Our interview with Gil Renberg on ancient incubation is SHWEPisode 70;  you’ll find our discussion of Ælius Aristides in Episode 72.

Christian H. Bull. The Tradition of Hermes Trismegistus: the Egyptian Priestly Figure as a Teacher of Hellenized Wisdom. Brill, Leiden, 2018.