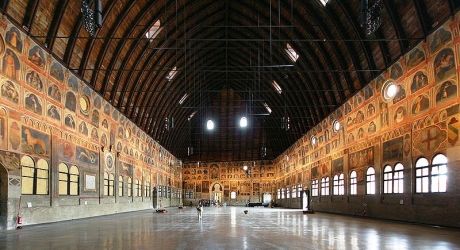 Even casual enthusiasts of western esotericism have heard of the esoteric perennialist Platonism of the Florentine Renaissance, constructed by figures like Marsilio Ficino and Giovanni Pico della Mirandola. But what was going on in the rest of Italy at the time? With this interview we begin to answer that question, examining the fascinating life of Niccolò Leonico Tomeo (Νικόλαος Λεόνικος Θωμεύς) of Padua: humanist, priest, philosophic Christian theorist, and esotericist of a very different stamp to the Florentines.

Tomeo was the son of an emigré East Roman family who had moved to Italy during the final years of decline of the Empire; he thus grew up speaking Greek, giving him a marketable skill-set in fifteenth-century Italy. Born in Venice in 1456 (three years after the fall of Constantinople), he moved to Padua at a young age, and then traveled around Italy in pursuit of the complete set of liberal studies including medicine, classics, astrology, and so on. Living out the remainder of his life largely in Padua (then part of the Venetian Republic), he was a heavyweight in international humanist circles (corresponding with Erasmus of Rotterdam and Guillaume Budé, among others), the teacher of Pietro Bembo, the greatest poet of fifteenth-century Italy, and many other important luminaries. And he wrote at a time of exceptional intellectual freedom: the short window in which utterly heretical work like his could openly be published was soon to close, but, boy did he make the most of it while it lasted.

Tomeo was busy with largely the same materials as the Florentines – classical pagan texts, especially the newly-rediscovered (for them) riches of the Greek language, Christian theology, and the scientific inheritance of the medieval period – but integrated these materials into quite a different worldview. Padua was ‘a powerhouse of radical Aristoteleanism’ in contrast to Florence’s Neoplatonism, leading to radically different views on natural magic, the nature of matter, and a fascinating theory of the imaginative faculties.

But Tomeo also held many beliefs which we might consider radically Platonist: he was reading a lot of Proclus (and the Pseudo-Dionysius), and held both that an ineffable One is the supreme principle, and that we must be rigorous in our apophatic discourse about the One. Jesus and the Holy Spirit never make an appearance in his dialogues, and God Himself tends to be ‘the One’. He also had a theory of the efficacy of prayer in which prayer functions along Proclan lines. He believed in the pre-existence of souls (yes, he read Origen), and cyclical reincarnation every thousand years (yes, he read Plato). His thought on the therapeutic power of music is in some ways similar to that of Ficino (lutenists take note!).

Other delights to be found in this interview include a major work on divination, centred around the Oracle of Trophonius (see Episodes 69 and 70), a sympathetic and open reading of the traditional polytheist religion of the classical world (without any assumption that it might conflict with Christianity in a serious way), and an oracular pet pelican.