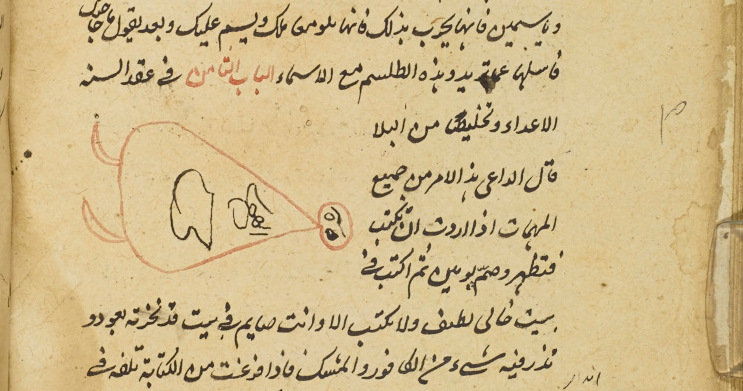 Sirāj al-Dīn al-Sakkākī (1160 Khwarezm – 1229 Qaryat al-Kindi) is widely known for his Miftāḥ al-‘ulūm, ‘The Key of the Sciences’, a work on Arabic grammar and rhetoric. Less known is his Kitāb al-shāmil wa al-baḥr al-kāmil, ‘The Book of the Complete and the Sea of the Perfect’, a comprehensive book on occult sciences covering astrological theory and practice, occult properties of gemstones and other natural materials, the making of talismans, and the esoteric properties of specific Qur’anic verses (all staples of mediæval Islamicate occult sciences), but also addressative practices aimed at all manner of Jinn, and even at more questionable entities like … well, the Devil. He lived into the thirteenth century, a time of catastrophic political change in the Islamicate world as the Mongol hordes swept through the civilisations of Asia, conquering at will, and Sakkākī seems to have adapted to the new circumstances with magical aplomb, becoming the court ‘magician’ to Chagatai Khan in his later years.

Our interview gives an overview of the book and discusses some of the usual stuff (or usual here at the SHWEP – things like construction of esoteric elites and esoteric lineage-building). But it also enters into much more interesting territory, discussing the role of the concept of the insan al-kamil, the Perfect Man, in the implicit conception of the mage lying behind the work, understood in terms of mastering the macrocosm through embodying it in the human microcosm. Selove also considers Sakkākī’s grammatical work in juxtaposition with his occult manual, exploring the ways in which the two realms – grammar and grammarie – influence one another and overlap.

[Corrigendum: al-Sakkākī’s birth date gets swapped for his date of death in the interview, making him live quite a bit later than he actually did!]

Emily Selove is Senior Lecturer in Mediæval Arabic Literature at the University of Exeter. She is currently the principal investigator, working with Dr Luca Patrizi, on the Leverhulme Trust-funded research programme ‘A sorcerer’s handbook: medieval Arabic magic in context’, which seeks to assess, edit, translate, and publish Sakkākī’s book of magic. She is a major organiser of the University of Exeter Magic and Esotericism Group, publishes the online comic Popeye and Curly, set in mediæval Baghdad, gardens, and brews her own mead.

Works Discussed in this Interview: