We speak with Marina Alexandrova, Senior Lecturer in Slavic Studies at UT Austin, about the life and thought of one of the most influential women in modern world history (and not just the history of western esotericism), the great Yelena Petrovna Blavatskaya (1831-1891), a.k.a. Madame Blavatsky, a.k.a. HPB. This interview gives both a critical and comprehensive biography of the great HPB and reflects on her thought, on different methodological directions we might wish to take in interpreting her life, and much more.

We discuss HPB’s early life as a highly-educated daughter of a prominent military and literary family, moving around the Russian empire to a number of cultural entrepôts. Fleeing a stifling marriage in Russia, she heads off on a series of epic travels in search of adventure and secret wisdom: during this eventful period (later formulated as ‘the veiled years’, concerning which it is quite difficult entirely to separate fact from later myth-making) she becomes involved in the organised struggle for Indian independence from colonial rule (whether in part as a Russian agent or not is still debated), she travels all over the world, and she meets with her mysterious initiated teacher in London in 1851. After this period, inspired by a spiritual mission, HPB co-founds the Theosophical Society with Henry Steele Olcott in New York City in 1875.

The Theosophical Society was an immensely influential, seminal, and innovative spiritual/cultural movement/organisation, bringing together many of the leading intellectuals and esotericists of the late nineteenth and early twentieth centuries across the world. Its historical importance can hardly be overstated, but in this interview we learn some of the perhaps-surprising events put in motion by this extraordinary global organisation. Perhaps most revolutionary was the move to ‘the East’, in which HPB and friends founded a world headquarters for the Theosophical Society in Adyar, India, and HPB herself entered the Buddhist sanga in then-Ceylon (modern Sri Lanka); even if this incident needs to be treated with circumspection by historians, the mere story is enough for us to speak of western esotericism truly growing beyond the scope of the West. We discuss the ‘Culomb Affair’, and the hostile ‘Hodgson Report’ published by the Society for Psychical Research, both of which dogged HPB’s final years, her major publications, and her final days, among friends and supporters in London. 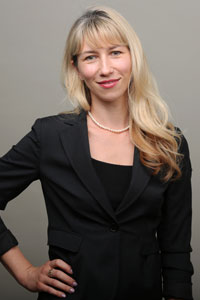 Born and raised in Saratov, Russia, Marina Alexandrova received her MA in English from Saratov State University, and her PhD in Comparative Literature (Russian and Spanish American Literatures) from the University of Texas at Austin. She specialises in the history of political and cultural dissent in Russia, Russian revolutionary movements, international Modernism and the avant-garde, spirituality in imperial Russia, and Russian intellectual history. She is a highly-active scholar both online and in print (even venturing into the theatre), some of which activity is summarised on her faculty page.

Many of HPB’s writings, including all those cited in this interview, are freely available online, for example at the Blavatsky Archives website. The International Association for the Preservation of Spiritualist and Occult Periodicals site is a further crucial research-tool for those interested in the sprawling publication-activity arising from Theosophy.