Episode 86: Matteo Martelli on the Pseudo-Democritus 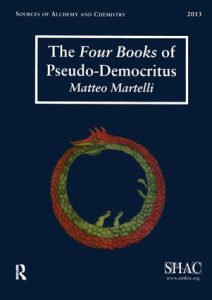 The author known as Democritus wrote four books some time in the first century CE: one book on gold, one on silver, one on gemstones, and one on dying techniques. These became one of the seminal documents of the alchemical tradition. None of them survives in its entirety, but we have extensive fragments, which allow us to see, to some degree, what the Pseudo-Democritus was up to. His works became one of the most important canonical sources for later alchemists, and he became a legendary figure.

We discuss how our Democritus became confused with Democritus of Abdera, the famous atomist philosopher of the fifth century BCE. We then look at two other important figures of the very early alchemical tradition, Bolus of Mendes (an Egyptian who lived some time probably in the second century BCE who wrote works on natural sympathies and antipathies and on artificial substances (χειρόκμητα)), and Ostanes, legendary Persian sage and alleged teacher of Democritus, both of whom represent earlier forays into natural science which fed into Democritus’ alchemical work.

Finally, Professor Martelli expands on the alchemical theory found in the Four Books: the concept of Nature is central, but is a multivalent and subtle category with several distinct usages. The four qualities (hot, cold, wet, and dry) are present as basic states of nature, following the Hippocratic and Aristotelean traditions, bringing about sympathies and antipathies in natural substances. We finish with a discussion of the anecdote wherein Democritus’ teacher dies without revealing the final secret of alchemy to him. Democritus then raises his spirit to question him, and learns that the secret has been hidden in an Egyptian temple, though its exact whereabouts remain obscure. Luckily, however, the temple collapses, revealing the message hidden within a pillar:

Matteo Martelli is Associate Professor in the Department of Philosophy and Communication at the oldest university in the world, the University of Bologna. He has published widely on alchemy, specialising in early alchemy in particular, and heads the ERC research-project AlchemEast: Alchemy in the Making: From Ancient Babylonia via Graeco-Roman Egypt into the Byzantine, Syriac and Arabic traditions (1500 BCE -1000 AD).

Check out Matteo Martelli’s many fascinating publications on ancient alchemy, some of which can be found on his Academia page. Also check out the ambitious AlchemEast project, of which he is the director, which is putting our understanding of the ‘lost centuries’ of alchemy on a much firmer footing, and keep your eye on the publishing project, Sources of Alchemy and Chemistry, from which we expect great things.