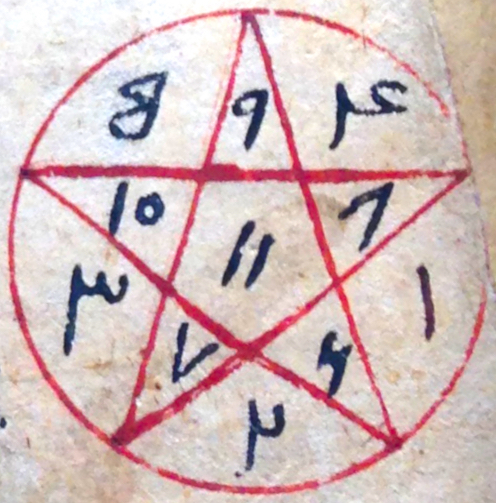 We chat further about all things magical and squared with Dr Hallum. We begin with a discussion of the two surviving MSS of a magic-square text by al-Mālaqī (‘He from Malaga’) which, although problems with the text abound (see Works Cited, below), nevertheless fills in a major gap in our knowledge of the tradition, including the astrological/lettrist rationales understood to lie behind why a given square should be associated with a given planet. Al-Mālaqī gives a reverse ordering to the square/planet correspondences to that given by Ibn al-Zarqālluh: Zarq has the 3X3 square associated with Saturn, and the magnitudes of squares increasing as you approach the earth, while Mal associates the 3X3 with the moon and they get bigger as you get further away.

These are the  two main systems found throughout Islamicate and European literature (and objects) on the subject. Ibn al-Zarqālluh’s system, followed by practically the whole of Christendom, has been labelled System 1 in modern scholarship; al-Mālaqī’s, which was vastly more popular in the Islamicate world, has been called System 2. System 2 routinely, and System 1 occasionally include the 10×10 wafq associated with the fixed stars, usually called the Sphere of the Zodiac.

We then discuss the ancient talismanic statues attributed to Apollonius of Tyana in the Christian tradition – including reference to Apollonius’ famous Giant Mosquito (see Works Cited below for the references) – and the subsequent Balinas traditions in Islamicate talismanic works. We also discuss the prominent roles played by ‘Pythagoras’ and ‘Plato’ and even ‘Thales of Miletus’ in the talismanic literature.

Many of the Islamicate scholars who made mathematical advances in the study of awfāq and wrote much of the earliest literature on the subject were astronomer-mathematicians working under royal patronage like al-Khāzinī (d. after 525/1130) the pupil of ʿUmar al-Khayyām (d. ca 517/1123), both of whom worked compiled zījes (books of tabulated astronomical data) for the Saljūq sultans and wrote lost treatises on magic squares. Here is an example from al-Khāzinī, BL, Or. 6669, fol. 123r, courtesy of Qatar Digital Library. Note that the numerical data in the tables is presented using Arabic alphanumerical notation although the text has nothing to do with lettrism or numerology.

Dr Bink Hallum is Arabic Scientific Manuscripts Curator at the British Library, and is currently doing Wellcome-Trust-funded postdoctoral research at the University of Warwick on the alchemical Twelve Books of Abū Bakr al-Rāzī. His research centres on Islamicate codicology, Græco-Arabic studies, the history of the sciences, and loads of other interesting stuff.