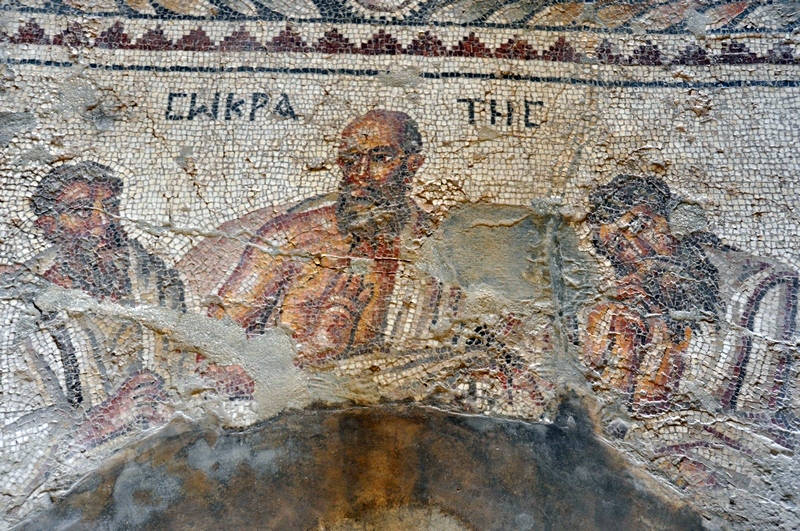 [Thanks to Livius.org for the above image from the Apamea Museum.]

Iamblichus of Chalcis (c. 240-c. 326) was a late-antique Platonist philosopher, but a Platonist philosopher of such an idiosyncratic bent that to call him a Platonist hardly seems to do him justice. He was deeply influential on the later tradition of polytheist philosophy going into the late empire, and served as a rallying-point for the traditionally-religious intellectuals who sought to oppose the encroachments of Christianity. His metaphysics combine a stated position of Platonic literalism with all the wild and luxuriant growth that we associate with texts like the Chaldæan Oracles and even with truly rampant metaphysical flora as found in the Sethian plēroma. He thought that human beings needed to free themselves from the material kosmos in part through rituals which looked suspiciously like sorcery to his contemporaries, but his justifications for these rituals went on to be perhaps the single-most influential apologies for addressative ritual in late antiquity and beyond. Among his students he seems to have been accorded a reputation for divine power more familiar from stories of Christian saints, Rabbinic teachers, or Sufi saints than from the annals of classical philosophy.

In this episode we run through what can likely be reconstructed of his life and teaching activity and of his extensive oeuvre.

Iamblichus. Noble ancestry: Eunap. 457. First studied with Anatolius and then “attached himself to Porphyry” (Πορφυρίῳ προσθεὶς ἑαυτόν): Eunap. 457. He ‘heard’ Porphyry: De anima 375.24-25. Iamblichus set up his school at Daphne: Malalas Chronographia XII.312.11–12. Dillon 1987, pp. 869–70 (see below) admits that Malalas may be right, but still opts on probabilities for Apamea.

Eunapius’ Lives of the Sophists exists only in a single manuscript. The first modern edition is Boissonade (Paris 1822). Wright (Wilmer Cave Wright. Philostratus and Eunapius: The Lives of the Sophists. William Heinemann/Putnam, London/New York, NY, 1922) remains superbly useful both on account of its excellent critical qualities (it is an edition of the text in its own right), its useful English translation, and the deep knowledge of late antique thought displayed by the editor/translator. Giangrande (G. Giangrande, editor. Eunapii vitae sophistarum. Rome, 1956) is a more modern edition.

This work has a somewhat complicated publication-history. In older scholarship we find references like De myst. 269: this 269 is a ‘Parthey page’, referencing the page numbers of Parthey’s edition (Berlin: F. Nicolai 1857), which did not consult all the MSS, and which is otherwise long out-of-date. The most influential modern edition was Des Places (Paris: Les Belles Lettres 1966), now updated by Saffrey and Segonds  (Paris: Les Belles Lettres 2018): both keep the by-now-standard Parthey pages in the margins, but also employ the division into Books and Sections originated by Scutellius (1556). These look like this: e.g. De myst. III.4 or III 4. As with the Budé editions generally, Saffrey and Segonds give line numbers based entirely on their own mise-en-page, so these are only useful for consulting their edition. Thus, the most thorough way of citing the De mysteriis can give us the rather long-winded e.g. I.20.63.15 (that is, Book I, Section 20 Scutellius, page 63 Parthey, line 15 Saffrey-Segonds).

For the podcast we are consulting Saffrey-Segonds 2018, and generally only bothering to cite the Scutellius Book and Section; if you want line numbers or Parthey pages, find them yourself. For the whole story of the text, editions, and so forth of the De mysteriis, see Martin Sicherl. Die Handschriften, Ausgaben und Übersetzungen von Iamblichos De Mysteriis: Eine kritisch-historische Studie. Akademie Verlag, Berlin, 1957.

Also of general use: