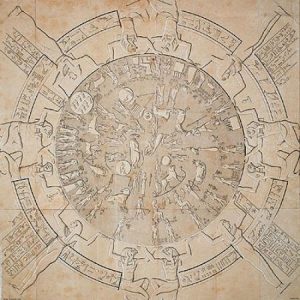 The history of astrology is one of the central stories of the history of western esotericism. This episode is loosely centred on the birth of western astrology proper in Hellenistic Egypt, but takes in lots of other important matters. We start with a few notes on the importance of astrology as a defining science, not only of western esotericism, but of the west more generally, looking at a few of the general ways in which it has been accepted, rejected, or domesticated down the ages. We then take a look at the Chaldæans, a.k.a. Mesopotamian diviners as received by the Græco-Roman world, and their contributions to the final transformation of Near Eastern omen-traditions into horoscopic astrology (not to mention their invention of the zodiac), at the Egyptians and their own contributions, in particular the fertile cultural breeding-ground of Hellenistic Alexandria and the role which its milieu played in the birth of western astrology, and at the Greek contribution in terms of the geocentric cosmologies discussed in the previous episode.

The result of the complex synthesis of all these elements was something easily recognisable as ‘astrology’: a system of divination based in a geocentric cosmos where the heavenly bodies, moving through the zodiac (and sometimes the Egyptian decans), determine or indicate events on earth, and the astrologer’s job is to read them to discern how these events are going to take place.

We make a quick, tantalising reference to the earliest known astrological manuals and related texts, such as treatises on the occult powers of stones and plants and on numerology. These works, now lost except in fragments, are significant in that they are the earliest manifestations of a genre which was of defining importance to western esotericism: the Hermetica.

Corrigendum: I attempt a working definition of astrology in this episode involving the idea of astral causation. However, as Chris Brennan points out in Episode 42, not all ancient (or modern) astrologers thought in terms of causation – for some, the stars simply give signs or omens, with no causal link being assumed. I have thus revised my typology, framing it instead in terms of ‘correspondence between stellar and earthly phenomena’. Thanks, Chris.

Chris Brennan, whom we interview in the next episode, maintains the Hellenistic Astrology website, where you can find an excellent timeline of ancient astrology which may be helpful in orienting oneself among all these dates and cultures. Marilynn Lawrence’s article for the Internet Encyclopedia of Philosophy is an excellent introduction.