In this extended interview we delve into various questions about ancient Hermetism and the Hermetica which are mostly unanswerable, but really, really interesting. Anna van den Kerchove fields these with good humour, scholarly acumen, and a beautiful exercise of the historical imagination. Points discussed include: 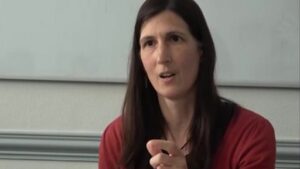 Anna van den Kerchove is Titulaire de la chaire d’histoire du christianisme ancien et patristique de l’Institut Protestant de Théologie in Paris. Her superb work spans pretty much all of our favourite fields in late-antique religion and the places where it meets philosophy, including lots of important work on aspects of ritual and performativity in ancient religion (and ‘magic’), studies on the Chaldæan Oracles, the Hermetica, the esoteric fringes of Orthodox Christianity, and so on, and more. She is involved in a number of really cool scholarly projects, including the amazing online database of voces magicæ/nomina barbara CENOB, and the Platonismes de l’Antiquité Tardive website, both of which provide unique and essential tools for scholars.