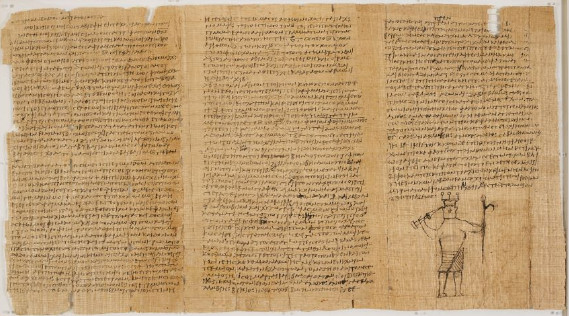 Talking of secrecy and public secrecy, we aim to get at how ‘secret’ this material was in its original Egyptian context under a Roman hegemony which tried to outlaw it. The conversation ranges from ancient Egypt to the seedy ‘adult’ bookstores of 1960’s Soho, with special reference to Marabout-diviners in contemporary Paris: the comparative method is alive and well here at the SHWEP!

We then turn to the topic of engineered epiphany, or ‘making gods appear’. Korshi worked on this very subject for his doctorate, and so is very well-placed indeed to speak thereupon. It seems to be a fairly late practice, as attested by the surviving evidence, although Korshi suspects that it goes back to the Ptolemaic period. This is the kind of conversation we love here at the SHWEP: pushing an expert to utilise their high-powered historical imagination to try to get at what these people were really getting up to when they saw a god. We talk about magical stagecraft, nineteenth-century spiritualism, the prospect of a laboratory-based study of magical invocation, and a host of related topics.

For the Kyranides, see the ‘Works Cited’ to the previous episode. For the Thessalos-text, ditto.

Please see the bibliography to the previous episode.