[Due to internet dæmones beyond our control, the sound-quality on this interview is – heh – unspeakable. We offer our apologies for the audio but none whatsoever for the pun.]

We are delighted to be able to speak with Henny Fiskå Hägg, whose book on Clementine apophasis is a must-read.

We begin by discussing the Greek term apophasis most generally as ‘denial’ – denial that a state of affairs can be expressed through words. This is the proper Greek term for what is often called ‘negative theology’ but, as Henny points out, apophasis need not occur in a theological context at all. Turning to Clement, we discuss the dialectics of presence and absence in his writing; God is utterly unknowable, but can be approached through his dynameis, through the Logos, or through Christ (which are all the same thing). His essence remains forever unknowable and unsayable, yet he is intimately connected to the creation through the Son.

We discuss Clement’s debt to the Middle Platonist milieu for his ways of speaking about the unspeakable God, and also what is original to Clement; Henny sees this not so much as a Clementine approach to apophasis, but an early Christian approach, which we see already to some degree in apologists like Irenæus, but more thought-out and coherently in Clement and, later, in Origen and the Cappadocian Fathers.

For Clement, God is separated from mankind and the whole creation by a vast and absolute gulf. I try to push back with the idea that the Logos is in some sense a mediating entity between the unknown Father and the creation, but Henny schools me on this; unlike in Origen, we do not see a strongly subordinationist Christology in Clement. What we do see is an esoteric scriptural hermeneutic turned up to 11, and the use of parables (following the example of Jesus himself), paradoxes (following the example of the philosophers), symbola (following the example of the ancient Pythagoreans), and other oblique ways of speaking to express the inexpressibility of the hidden God. The truth behind the expression will be understood only by the gnostic Christian, but Henny is careful to distinguish this form of esotericism, based on a progressive initiation model, with the more exclusive esotericisms typical of contemporary ‘Gnostic’ groups, based on a strong insider/outsider distinction [Note that this idea about the Gnostics will in turn be questioned when we discuss the Sethian texts with Dr Dylan Burns in a future episode].

We then turn to the idea of ‘deification’ or assimilation to God, its importance for Clement, and its enduring centrality in the Orthodox churches (as opposed to the Catholic and Protestant emphasis, largely, on salvation). And turning to the afterlife of Clement’s thought more generally, we discuss his Nachleben, both within scholarship and within different strands of Christian theology. 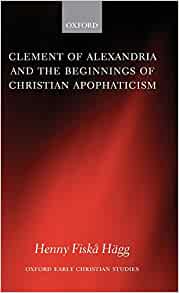 Henny Solfrid Fiskå Hägg is Associate Professor in the Department of Religion, Philosophy, and History at the University of Agder. She has published widely on Clement and other early Christian theologians (a list of her publications can be found on her university profile), and literally wrote the book on Clement’s apophatic theology understood in context (see Recommended Reading below).

A selection of Clement’s statements about the unknowability of God: