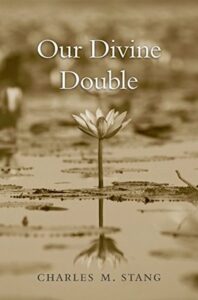 Our conversation turns to the enigmatic figure of Henry Corbin (pictured above, in conversation with Carl Jung), a divisive thinker whose work is deeply interested in the figure of the divine double and angelomorphic transformation. Dr Stang also takes on with aplomb a number of our trademark irresponsible questions, including the fascinating and tricky one of where the Doppelgänger or dark double fits into the story of divine twinship.

Charles M. Stang is Professor of Early Christian Thought at Harvard Divinity School. His interests include: the development of asceticism, monasticism, and mysticism in Christianity; ancient philosophy, especially Neoplatonism; the Syriac Christian tradition, especially the spread of the East Syrian tradition along the Silk Road; other philosophical and religious movements of the ancient Mediterranean, including Gnosticism, Hermeticism, and Manichaeism; and modern continental philosophy and theology, especially as they intersect with the study of religion.

We have not listed every author mentioned in the discussion of modern authors on doubles – Freud, Poe, Pynchon, and even E.T.A. Hoffman are too well-known and easily-accessible to require bibliographic reference here. However, be sure to check out Sadegh Hedayat, the great Persian master of the macabre, if you haven’t already.

For an extremely interesting discussion of Corbin by our guest, check out this clip, given at an online talk for the Cambridge Centre for the Study of Platonism.