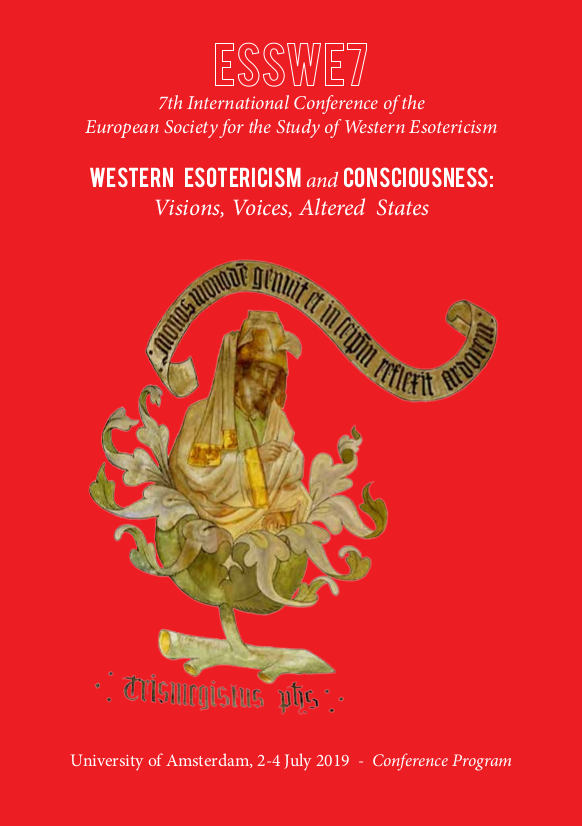 We have returned from Amsterdam and the Seventh Conference of the European Society for the Study of Western Esotericism. The ESSWE conference is always a delight, but this year’s event was particularly delightful for a few reasons.

First of all, 2019 marks the twentieth anniversary of the Centre for the History of Hermetic Philosophy and Related Currents at the Universiteit van Amsterdam, the closest thing currently in existence to a graduate programme in western esotericism. It has been a stunning twenty years, and so there was a feeling of festivity in the air, over and above the excitement you naturally feel when hundreds of specialist scholars of western esotericism gather together and nerd out. Congratulations to all the academics and staff of the Centre, and a special ‘Gefeliciteerd’ to R.B., whose support and vision have created and sustained the Centre for twenty years, transforming our corner of the humanities in the process. 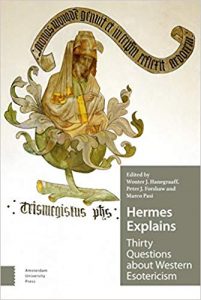 On a related note, conference attendees got a super-classy book, which is several cuts above the usual pamphlet you get at a conference, and does a number of things exceedingly well. It commemorates twenty years of the Centre for the History of Hermetic Philosophy and Related Currents. It gathers the work of 30 scholars of western esotericism from widely divergent backgrounds, specialisms, and methodological approaches, and sets them all to answer commonly-asked questions about aspects of western esotericism. In this way, it sort of serves as a ‘western esotericism for dummies’ in an oblique way, which is a much-needed function. All around, a superb volume to own.

Secondly, the Ritman Library, a.k.a. the Bibliotheca Philosophica Hermetica, a.k.a. the Embassy of the Free Mind, is up and running again, which is great news for students of western esotericism, and we were invited to a reception there combining wine and nibbles, a beautifully-crafted in-house exhibition showing highlights of the Ritman collection, and some solemn honouring of benefactors of the study of western esotericism at the Universiteit van Amsterdam. For those who never had he pleasure of working there, the BPH was/is the world’s only open-access library devoted to the study of western esotericism; there were all the main scholarly publications to be had, but also incunabula, manuscripts, a ridiculously-rich collection of emblem-books and other visual art of the esoteric, and much more.

As many will know, the BPH ran into difficulties some years ago, and was preserved, basically as a cultural treasure of the Netherlands and Amsterdam, through the help of a number of bodies (and maybe the online petition had something to do with it as well). When all the dust setled the BPH had moved to a ridiculously elegant, enormous house at Keizersgracht 123, but is not yet open as a library. The building was pretty much a wreck, and the last few years have seen it transformed into a tastefully-done public space (there’s a café!) with an exhibition shewing some of the many treasures of the library; work is in progress to re-open the library, and seemingly this time on an even more ambitious scale than previously. Lovers of western esotericism everywhere are delighted, but especially those of us lucky enough to have seen the real progress being made on-site. Many thanks to the Ritman family and the staff of the Embassy for their superb hospitality, and we look forward to once again working in the sympathetic confines of one of the world’s great institutions (and we mean that; there’s a lot more to the greatness of a library than size. See our post about the Warburg Institute for what we mean by a great library).

Thirdly, the conference coincided with a major exhibition on Kabbalah at the Joods Historisch Museum just off the Waterlooplein, and the conference organisers managed to get us a special private viewing of this extraordinary exhibition on the Monday night before the conference began. This was really something special; it must surely be the most ambitious exhibition on the subject of kabbalah ever attempted, shewing riches from the very old (the earliest known copy of the Sepher Bahir!) to the very new (contemporary artworks drawing on kabbalistic themes and spirituality) rubbing shoulders comfortably in a beautifully-designed space. For anyone interested in the history and development of kabbalah, this exhibition probably justifies a trip to Amsterdam on its own. Seriously. We won’t even try to give a rundown of all the treasures on display, but our mind was blown by the kabbalistical cutout animations (some of which can, sigh, be found on Youtube) by the great Harry Smith (he of the Anthology of American Folk Music, and an all-around esoteric hipster of the first water) made in the 1950s (!!!), beating Terry Gilliam, Bob Gale, and their ilk by a decade or so. The ritual objects are also mind-blowing.

Turning to the conference itself, as always, the main complaint to be leveled against the ESSWE conference is that there’s so dang much of it. A glance at the Program, with its SIX parallel sessions running simultaneously, illustrates this problem: sure, you can check out the panel on Accessing Contemporary Esoteric Techniques for Altering Consciousness, but you’ll have to miss out on Aleister Crowley and the Transformation of Consciousness, An Alternative History of Visions and Visionary Texts, Christian Theosophy, Psychical Research, and Occult Visions. And no one in their right mind wants to miss out on any of these. This of course shows how far our field has come, and how strong the ESSWE is as an organisation for mustering interesting research into a host of historical contexts. Nevertheless, I suspect that the next big development in esoteric conference-culture will be an efflorescence of more focused gatherings on particular periods or subjects. This trend has arguably already begun, with a number of conferences in recent years which, while falling comfortably within an ESSWE-type subject-matter, focused on a more tightly-drawn theme or historical period.

Despite the danger of esoteric overload, his conference still had he feeling of ‘family’ (for me anyway) which is typical of our field. As we enter the mainstream, we must be careful not to lose this; one need only only look at the thronging boredomfests of some of the larger conferences to do with the the History of Religions (no names, please!) to see the potential pitfalls of getting too big. Hopefully the ESSWE will continue to grow in a sustainable way which continues to foster its international community of scholars as a community. I think a case can perhaps be made for breaking up the central, biennial meeting somehow into more focused, annual meetings, or perhaps alternating between a general meeting one year and a focused meeting the other year. Easy for me to say, of course, but it’s a suggestion, and I feel confident that if people stepped up with the drive to organise such an off-year, specialised conference on some aspect of western esotericism, the ESSWE would play ball. (Note broad hint)

This conference continued to build on positive developments of the last ESSWE: Islamicate esotericism was in full effect, with three sessions organised by our beloved ENSIE (on which see our interview with Dr Liana Saif) and esotericism in antiquity was represented by a panel big enough to have been divided into two sessions, both of which were full of amazing material (For a paper-by-paper analysis of the antiquity panel, see the detailed discussion by Korshi Dosoo). The medieval world (or perhaps ‘so-called medieval’ is more apt) still needs to be better represented in our conferences (despite the valiant pathbreaking work of scholars in recent decades, particularly in the field of magic), with East Roman esotericism remaining a gaping hole in the historical story. Does anyone want to organise a conference on Byzantine esotericism to get the ball rolling?