Light in Darkness: An Audio Tour of an Important New Exhibition on the Life and Thought of Jacob Böhme 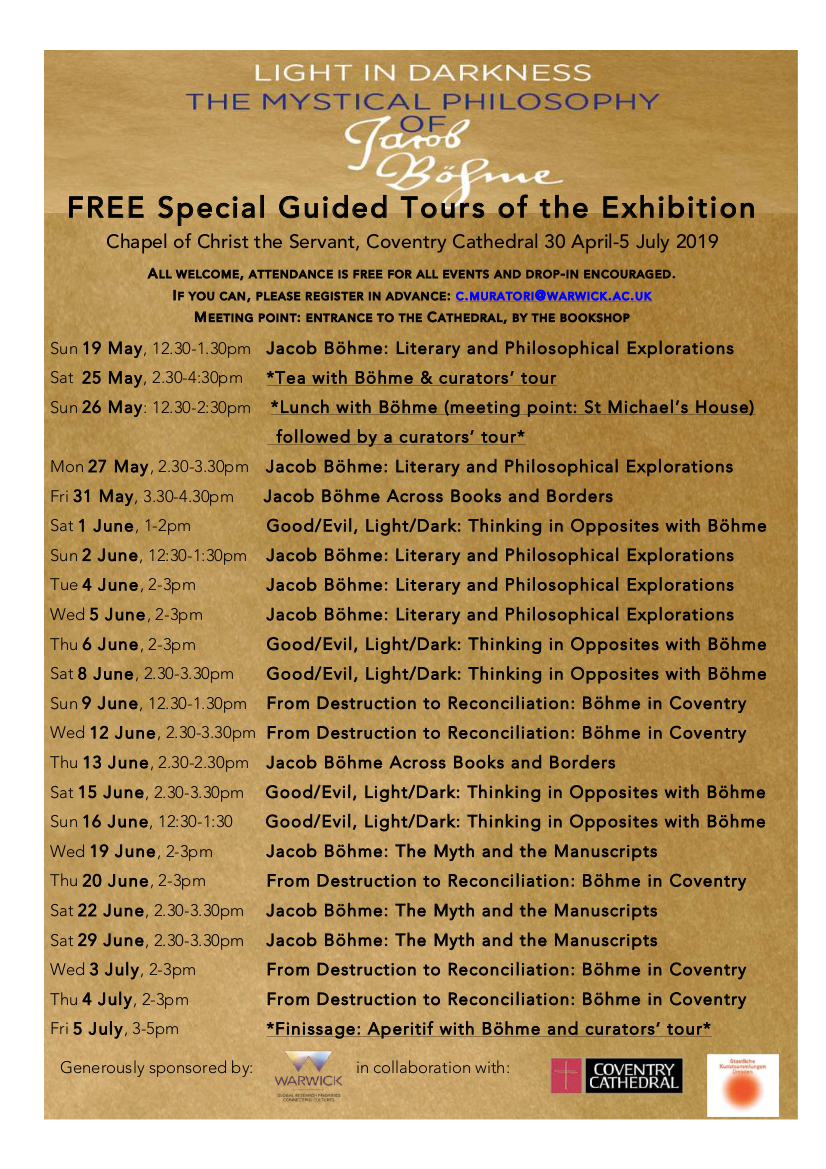 This interview was an absolute delight to record, as it involved being shown round the first important international exhibition on the life and work of Jacob Böhme, perhaps the greatest Christian esotericist of the Reformation era, by one of its erudite organisers, Dr Lucinda Martin. The setting – the modern cathedral of Coventry – was somehow perfect, and the unplanned organ accompaniment raised things to a different level entirely!

The present exhibition is curated by three scholars, Lucinda Martin, Claudia Brink, and Cecilia Muratori, and is the product of the sister-cities relationship between Coventry and Dresden, the German city which was home to the first major Böhme exhibition. Both cities were carpet-bombed during the Second World War, so their sisterhood is rooted in the tragedies of the past; Coventry Cathedral remains a centre for conflict resolution and non-violent mediation. There are two more exhibitions in the works, one at Amsterdam’s Ritman Library (the Bibliotheca Philosophica Hermetica, a far-famed centre of western esoteric learning) in December 2019, and another, as-yet unscheduled, in autumn 2020 at the University of Wroclaw. Keep on eye on this website in coming months for announcements (but be prepared for sudden swerves from English to German and back again).

Those new to Böhme are in for a treat with this interview, as Dr Martin manages to expound much of the Teutonick Philosopher’s abstruse and amazing doctrines alongside discussions of his historical importance, of the neglect from which he has suffered in the last two hundred years or so, and much else. But old Böhme hands will find a lot to get excited about as well.

Our interview was structured by the setup of the exhibition itself, a circular walk around a central, golden pillar, looking at a sequence of illustrated panels, each devoted to a different aspect of Böhme’s thought. Special thanks for whoever that was playing the organ in the background, and to the choir.

Be sure to contemplate the pictures below, which the images described in the interview, preferably while listening. The sixteenth century saw an unprecedented flourishing of innovative and beautiful visual art in western esoteric contexts, particularly with the rise of highly-developed printed illustrations, and Böhme’s followers in the seventeenth century availed themselves of this wealth of imagery and technical innovation, in some cases taking the possibilities of esoteric illustration to new heights. Dionysius Andreas Freher (1649–1728) in particular stands out as one of the greats of esoteric visual art in any era, and invented a new form – the esoteric pop-up book – specifically to advance and explain the complex ideas of Jacob Böhme. Freher, in his turn, was the single greatest inspiration for William Blake (1757-1827), another innovator in visual techniques, an esoteric thinker of deep and unique beauty, and one of England’s greatest poets.

This image, from Robert Fludd’s Utriusque cosmi historia, is printed out in a huge format on the floor, so that visitors to the exhibition walk along the path of Fludd’s dove of the Holy Spirit in the act of creation. 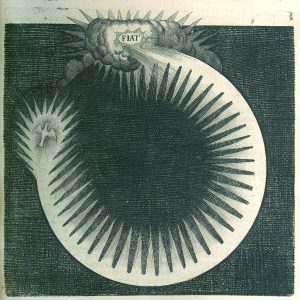 COSMOS: Another image from Fludd, depicting the cosmic darkness from which all reality sprang in the beginning. The inscription: ‘And thus into infinity.’ 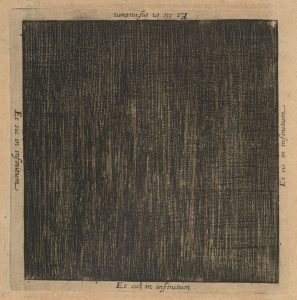 One of Dionysius Freher’s extraordinary ‘pop-up’ illustrations of Böhme’s thought. 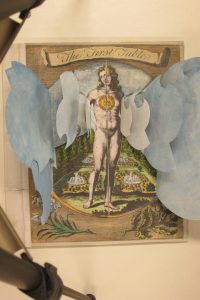 Here is the trailer for the film Morgenröte im Aufgang by Ronald Steckel and others. An English version can be found here.

Yet more Fludd, showing the mechanisms of divine inspiration and cognition in the human being. The Böhmian connection is to be found in the idea of the Mundus imaginabilis, the world of the imagination. 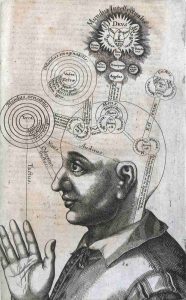 Kaym and Haüblin, from Brightly Shining Mirror of the Heart, 1680. One of an extraordinary series of illustrations of the authors’ take on Böhme’s thought. 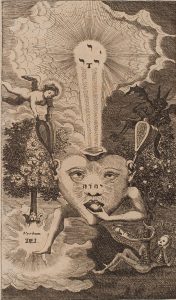 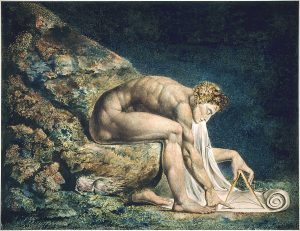 A portrait of Böhme at work on his philosophy amid the tools of the cobbler’s trade. 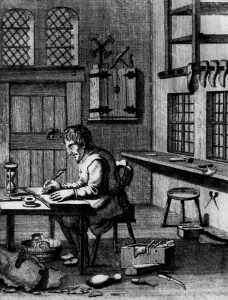